Aerial Evolution Association of Canada – Association pour l’Évolution Aérienne (AEAC) is pleased to announce the 13th national Student RPAS Competition flying phase and special prize winners. This year, the student teams were asking to design a system to find an intruder in an embassy compound and to locate and deliver a suspicious package to a secure container.

The purpose of this annual competition is to:

“Promote and develop Canadian expertise and experience in unmanned systems technologies at the university and college levels.”

There are many different types offacilities considered to be ‘Critical Infrastructure’, due to their  importance in the functioning of society, ie. power plants, the housing of important government institutions (eg, Parliament, National Archives) or important people (embassies, Rideau Hall).

Task 1 involved locating an intruder who, after breaching embassy walls continued to roam the compound. In Task 2, teams had to find and retrieve an explosive device then place it in a secure container. Teams representing eight universities from across Canada participated in the flying component while two teams spent valuable time observing.

For the second year, teams were invited to design a Remotely Piloted System, using both a ground vehicle (UGV) and an aerial vehicle (RPAS), or hybrid to support the mission. One hybrid vehicle was able to land, drive to pick up the package, then take off and hover while winching it into the container.

The design paper winners announced earlier this year were honored at the awards ceremony held Sunday evening 8 May.

A panel of seven judges representing a cross section of the RPAS sector, were impressed by the quality of the reports, the inclusion of new technologies into the systems and the way the solutions were presented.

Prizes recognizing innovation, perseverance and a  Judges Award for a unique quality were also awarded.

Teams were required to pick up an ‘explosive device’ of unknown size and shape.  UBCO created a highly unique pneumatic claw system, which used 3D-printed flexible tube ‘fingers’ to solidly grip the device regardless of its shape; a UAS-mounted air pump and tubing provided vacuum to the fingers to close them around the device.  This gripper was the first-ever use of pneumatics in the student competition and a significant advantage over the grippers designed by other teams.

One of the tasks in the competition was to pick up an ‘explosive device’ and transport it for disposal.  Points were awarded for picking up the device remotely, but teams had the option of manually attaching the device to their lifting mechanism.  ETS was determined to successfully complete all parts of the task, including remote pickup.  In spite of control difficulties, they tried many times to initially pickup the device, and were eventually successful – the only team to pick it up remotely.

The Toronto team had a ‘uncontrolled disassembly’ event (crash) in Friday practice.  They then spent two days scrounging parts, rebuilding components of their drone, having new parts fail, trying again, and eventually being unable to fly…but not for lack of trying.  In addition, they produced an Incident Report on the Friday crash although not required to do so, which was declared by the Transport Canada rep to be a model for others.

Thanks to the generous support from industry sponsors, cash prizes in excess of $15,000 were awarded to these outstanding teams.

AEAC would like to thank the competition committee for their perseverance and innovation in keeping the competition going remotely for two years during COVID-19. Although the team participation numbers were down, their enthusiasm to tackle the scenario, and learn from each other, the committee and sponsors, took off on Day 1. Upon their initiative, the University of Manitoba submitted a comprehensive observers report.  The group of dedicated industry professionals and former competitors collaborated with the teams to keep the standard of this world class competition. All look forward to meeting again in CED Alma in2021. 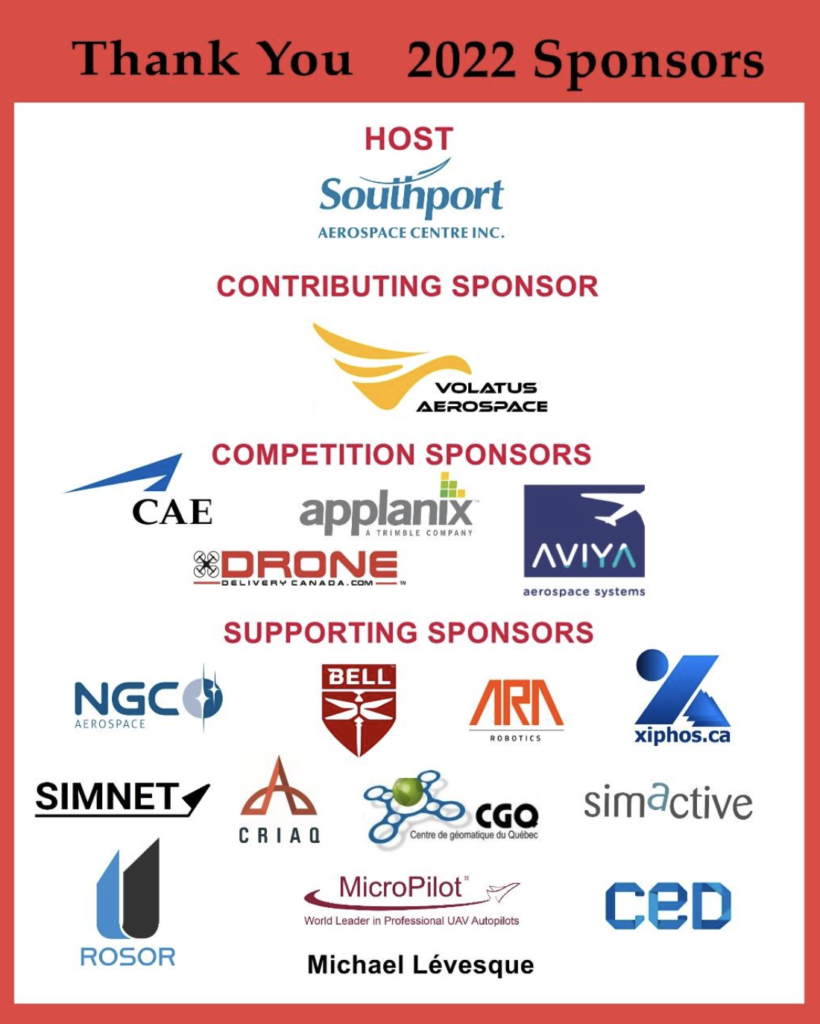